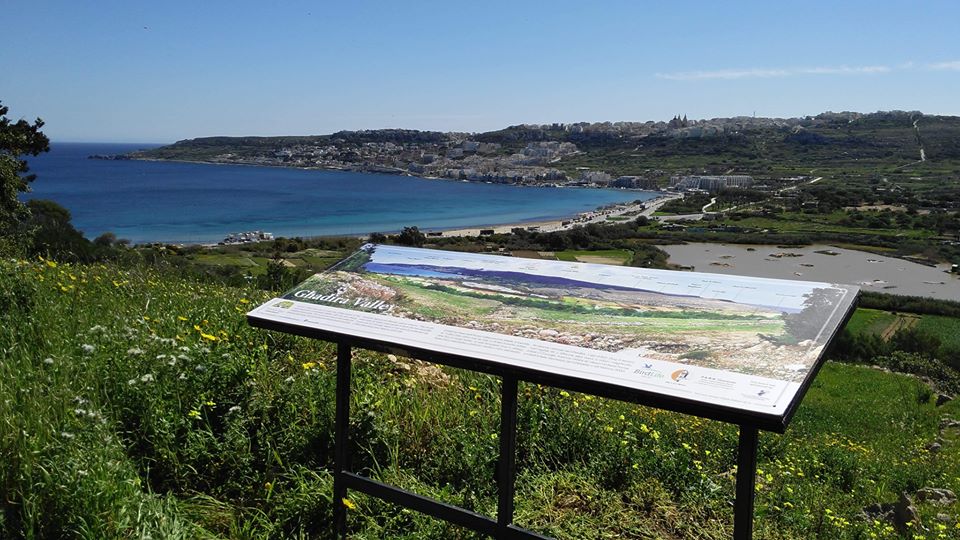 Following the most recent spate of vandalism at Foresta 2000 last year, in which a number of mature Olive trees were sawn down, The Alfred Mizzi Foundation intervened and thanks to a financial donation, a number of works were carried out to improve the area during the summer.

New benches were laid out, which are now being used by visiting school children doing fieldwork on site. A number of new information panels were also set up, guiding visitors to the treks to be taken around the site, as well as the flora and fauna that can be seen.

Foresta 2000 is situated on the ridge overlooking the Għadira Nature Reserve in Mellieħa.The idea of Foresta 2000 was conceived in 1995 when BirdLife Malta came up with the idea of restoring an area of degraded woodland to its former glory. Works on the area started in the early 2000’s when BirdLife Malta also invited Din l-Art Ħelwa and PARKS (The Directorate for Parks, Afforestation and Countryside Restoration, now known as the Ambjent Malta agency) to join the project. Initial works centered on stabilising soil, building dry stone walls and marking out footpaths.

As Ray Vella, managing warden at Foresta 2000 Nature Reserve recounts, the hardest part back then was the tree-planting exercise with no fewer than 20,000 trees and shrubs planted. “All the painstaking hours of work and the occasional disappointment in terms of acts of vandalism, all pale in contrast to the forest we have created” says Ray Vella. “Walking through the site, full of butterflies and bees, with birds breeding in the conifers and Lentisk bushes, means that BirdLife Malta’s dream is now turning to reality, a reality which can be freely enjoyed by the members of the public”.

The vandalism act of last year at the public site was a setback to all the hard work carried out throughout the years. The healthy Olive grove of 36 trees which was cut down by an electric saw, had been donated by Din l-Art Ħelwa and planted eight years before.

The incident in June 2017 caused an estimated €3,600 worth of damage and was a deliberate attempt to dishearten the work done by both BirdLife Malta and Din l-Art Ħelwa. Thankfully, however, in response to what happened, a number of individuals and organisations offered their support. The Alfred Mizzi Foundation went a step further and committed to help by financially supporting a number of works needed in this unique and diverse woodland.

Chris Briffa from The Alfred Mizzi Foundation said: “Our Foundation is ever more aware of the need to safeguard and indeed enhance the local environment. Foresta 2000 is a national gem and we are delighted to have been able to assist BirdLife Malta in providing an uplift to the area.”

The Foresta 2000 afforestation project is no stranger to vandalism attacks. In September 2004, around 100 trees were uprooted and damaged at the 104-hectare reserve together with fencing and signs. During 2006 in three separate occasions between July and September fire and arson attempts were reported at the site which was left vandalised.

In May 2007, a further 3,000 trees were cut down overnight. Then, in April 2010, 104 trees were damaged which then led to the conviction of three hunters who on appeal were given a fine of €12,229.35 each for their involvement. Apart from these vandalism attacks, in a separate case in April 2009 a ranger was shot and also had to be hospitalized.