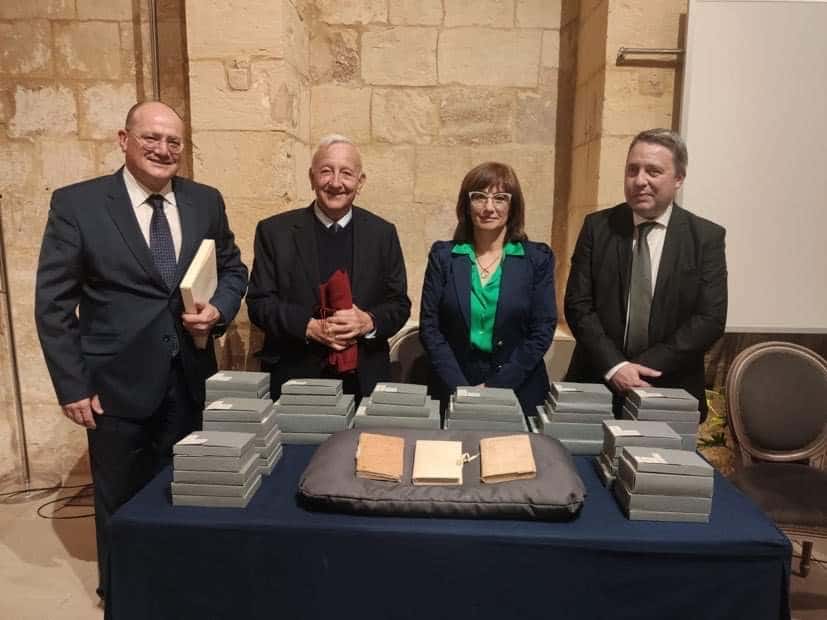 In 2014, The Alfred Mizzi Foundation sponsored the conservation of the entire collection of notarial volumes pertaining to Notary Bartholomeo Selvagij de Via (active 1530-1551) by means of a generous contribution of €50,000 through the ‘Adopt a Notary’ scheme of the Notarial Archives Foundation (NAF). Seven years later, a total of 57 manuscripts have benefitted from this donation and have been conserved for future generations. A commemorative event in celebration of this achievement was held on the 25th February 2022 at San Anton Palace, under the patronage of H.E. George Vella, President of Malta.

These precious, documents are held at the Notarial Archives at 24 St Christopher Street, Valletta and are a treasure trove of information on the first few years of the Order of St John’s rule over the Maltese Islands. Notary Selvagij de Via was one of those few loyal Rhodians who had migrated with the Hospitaller Order after it had been ousted from that eastern Mediterranean island by Ottoman forces in 1522. He had been the Order’s appointed notary already at Rhodes and continued his notarial activities from Birgu from 1530 onwards.

Documentation on this early period of Hospitaller rule is rare, which made the preservation of Notary Selvagij de Via’s manuscripts of paramount importance: their study permits insight into the daily life and occurrences of a population undergoing a gradual but significant change.

Under the supervision of the NAF Head of Conservation, Dr Theresa Zammit Lupi, the 57 notarial volumes of Notary Bartholomeo Selvagij de Via received professional conservation treatment by a team of conservators. Whilst treatments were tailored to the requirements of each manuscript, typical interventions included paper repairs and the consolidation of ink-corroded leaves. Most of the volumes also had to be rebound in parchment with conservation-grade classic calfskin in order to replace the acidic 20th century boards that were causing damage to the manuscripts. Each manuscript is also housed in its own protective enclosure and as a collection will be amongst the first to be digitized once the newly rehabilitated archives opens its doors again.

Dr Joan Abela, President of the NAF, stated that this important conservation project has been the result of a collaborative effort; she thanked The Alfred Mizzi Foundation for investing in our nation’s paper heritage and in so doing sending a strong message that our archives matter.  She added that, “A team of professional conservators headed by Dr Zammit Lupi have ensured that the authenticity of this unique collection is scrupulously preserved and no scrap of history is lost. We encourage companies, institutions and individuals to participate in our Adopt a Notary Scheme to help us save our archives which are the memory banks of the community.”

Commenting on this project, Albert Petrocochino, a trustee representing The Alfred Mizzi Foundation said “we are particularly proud of our association with the Notarial Archives Foundation and of the sterling work being carried out by Joan Abela, Theresa Zammit Lupi and their wonderful team of volunteers.”

National Archivist Dr Charles Farrugia welcomed this initiative and sponsorship and expressed his optimism that now that the Notarial Archives falls under the responsibility of the National Archives, the sector will acquire the right archival expertise in managing the extensive treasures it holds and widen professional services to the public.

Minister Josè Herrera expressed the support of his Ministry for such initiatives and thanked all sponsors, staff and volunteers who support the archives sector.  The developments during the last two years led to a stronger archives sector and safeguarded the future of the Notarial Archives through legal changes to have it operate under the National Archives.  This will strengthen the long-term vision and professionalism of the sector.