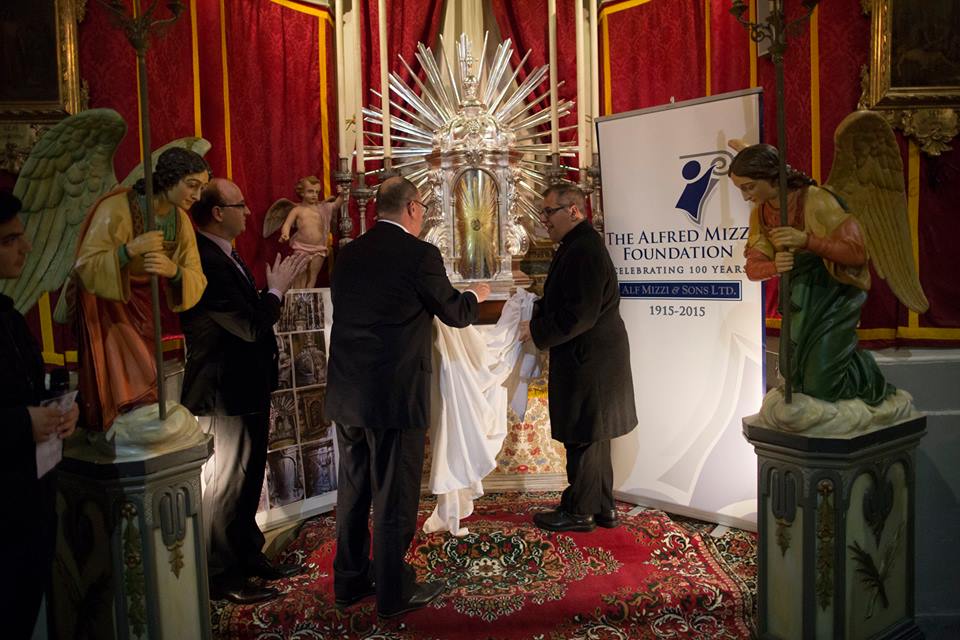 Since its foundation in the year 2003, the Għaqda Dilettanti Knisja ta’ Lapsi has worked to restore a number of works of art and liturgical objects that grace the Old Parish Church of St. Julian. During the last year, this NGO commissioned Mr Omar Camilleri to work on the restoration and re-gilding of an antique solemn exposition throne. This project was possible through the generous support of The Alfred Mizzi Foundation.

The throne, popularly known in Maltese as ‘ġilandra’ (derived from the Italian ‘girandola’, in a clear reference to the revolving door included in the structure which is opened to reveal the Blessed Sacrament in a monstrance), is carved in wood and is a splendid example of a religious artifact in the Baroque tradition, dating back to the second half of the 19th Century. The throne is displayed on the main altar of the Old Parish Church of St. Julian on special occasions, particularly for the feast of Corpus Domini, the body and blood of Christ.

Although the wooden structure of this throne was found to be in very good state of conservation, the gilding suffered considerable damage due to deposits of dirt and many losses and gesso chippings, mainly due to wood movements caused by high level of humidity and incorrect handling in the past. During discussions on the method of treatment, it was agreed that whilst the wooden structure should be conserved and restored, the exposition throne was to be re-gilded in its entirety. This was deemed to be essential and justifiable on the grounds that this object is intended for use in liturgical rites and ceremonies.

The project commenced in the summer months of 2017, when layers of gesso were removed to reveal the wooden structure of the throne and sunburst rays. Following this process, the structure was re-consolidated. Some of the missing wooden sculpture was also replicated. 20 layers of gesso were later applied. Subsequently, the throne was re-gilded with silver and gold leaf, as it was originally, making use of the bole method. All original engravings were replicated to ensure absolute fidelity to the original.

Parish Priest Fr. Claude Portelli and members of the Għaqda Dilettanti Knisja ta’ Lapsi wish to thank the Board of Trustees of The Alfred Mizzi Foundation for their generous support. It is thanks to this foundation that this work of art has been returned to its pristine glory and preserved for future generations.

This site uses cookies. By continuing to browse the site, you are agreeing to our use of cookies.

We may request cookies to be set on your device. We use cookies to let us know when you visit our websites, how you interact with us, to enrich your user experience, and to customize your relationship with our website.

Click on the different category headings to find out more. You can also change some of your preferences. Note that blocking some types of cookies may impact your experience on our websites and the services we are able to offer.
These cookies are strictly necessary to provide you with services available through our website and to use some of its features.

Because these cookies are strictly necessary to deliver the website, you cannot refuse them without impacting how our site functions. You can block or delete them by changing your browser settings and force blocking all cookies on this website.
These cookies collect information that is used either in aggregate form to help us understand how our website is being used or how effective our marketing campaigns are, or to help us customize our website and application for you in order to enhance your experience.

If you do not want that we track your visist to our site you can disable tracking in your browser here:
We also use different external services like Google Webfonts, Google Maps and external Video providers. Since these providers may collect personal data like your IP address we allow you to block them here. Please be aware that this might heavily reduce the functionality and appearance of our site. Changes will take effect once you reload the page.

Privacy Policy
We use cookies to ensure that we give you the best experience on our website. If you continue to use this site we will assume that you are happy with it.OKRead more