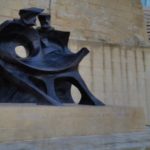 As part of the centenary celebrations of Alf. Mizzi & Sons Ltd and on the occasion of the 450th anniversary of the founding of Valletta, The Alfred Mizzi Foundation commissioned a monument of two gifted architects connected so closely with the building of Valletta: Francesco Laparelli and Girolamo Cassar. The work of John Grima was inaugurated by the Prime Minister at the top of Ordnance Street, Valletta last week. The monument is strategically placed between the modern Parliament building and the bombed Opera house.

The overall objective of the Foundation is the promotion, diffusion and safeguarding of the Maltese culture, its heritage, education, the environment and social solidarity. Over the years, Alf. Mizzi & Sons has passed on considerable funds to the Foundation with which it has been able to assist a great number of worthy causes.

In the field of education the Foundation as sponsor is second only to the University of Malta, he said. Another project undertaken by the Foundation is Sahhtek,a national study, over three years, about the health of the Maltese.

When it comes to social solidarity the Foundation wanted to create somewhere where those in need can find a place to eat and sleep. So, together with Caritas, and the Ministry for the Family and Social Solidarity, the Fondazzjoni Dar il-Hena was set up, the first tripartite venture between the government, the church and private enterprise. A few months ago Dar ilHena launched a soup kitchen and night shelter in Malta at Dar Papa Frangisk, Santa Venera, Mr Vella told us.

The third centenary project was the funding of a monument commemorating the two architects who designed Valletta. “One may ask whether Laparelli and Cassar need a monument when, in fact, Valletta is their monument. But they share this monument with other great people such as La Vallette, so it was decided that a monument solely dedicated to them would be commissioned.” Here Mr Vella thanked Mr Mario Cutajar Principal Permanent Secretary, Mr Kenneth Gambin and his colleagues of Heritage Malta and John Grima for their help and cooperation.

Perit Edward Said then went on the podium. He spoke about the building of Valletta and the laying of the first stone on 28th March, 450 years ago. He referred to Laparelli and Cassar as ‘giants of architecture and civil engineering’ and referred guests to the research works of Dr Roger Vella Bonavita, Dr Stephen Spiteri and the late Professor Quentin Hughes who have written extensively about the building of Valletta. Just months after the Great Siege ended the project for the building of a fortified city met with approval everywhere and money and jewels filled the coffers of the Knights of Malta towards the project. The gift of Pope Pius V was the professional services of Francesco Laparelli who had designed many papal projects including Castel Sant’Angelo in Rome.

Laparelli then 45 years old landed in Malta on 28 December 1565. Just a week later he presented Grand Master La Valette with a plan for the city to be built on Mount Sceberras.

Perit Said when on to talk about Laparelli and his close involvement with the building of our capital city. It is no wonder that the Grand Master called him ‘an exceptional man’, he told his audience. But after three years Laparelli decided he wanted more fame and left the reins in the hands of Girolamo Cassar. He travelled to Crete but there he was most unfortunate, contracted the plague and died a painful death.

Perit Said then went to talk about Cassar who was probably born in Birgu. He worked closely with Laparelli but decided that he had to widen his vision and so visited Rome, Naples and Lucca which were then leading cities when it came to architecture. On his return Cassar designed churches – including that of St John – the Grand Master’s Palace, houses, the auberges of the knights, convents and so much more. In fact we do not appreciate enough his simple style of design, Perit Said said. It was a style unique to Valletta which was a result of the urgency, economy and modest spirit of the knights who thus created Valletta Città Humilissima. Girolamo was helped by his son Vittorio who took over when his father died.

Mr Said referred to the changes and embellishment of Putirjal “as I still like to call it” which had been abandoned for many years. He referred to this new monument as the ‘cherry on the cake.’ He then said that architects cannot take all the glory because the building of Valletta would not have been possible without the work of thousands of carpenters, builders, anonymous slaves, not forgetting the donkey and mule – all of whom with great sacrifice and hard work brought to life the designs of Laparelli and Cassar.

After thanking the Alfred Mizzi Foundation he appealed to the government to invest in the protection of our heritage especially in educating the public to take pride in our buildings which are the pillar of our national identity.